So with marbling you’re floating your colors on top of your solution and then in this case, gently laying your paper on top of the design created and transferring the design to the paper. But why does this look like rippling 3-D fabric instead of the flat 2-D paper it is on you ask? That, my friends, is called the Spanish Wave pattern. The story goes that it was accidentally invented by a drunk Spaniard way back in the day, hence the name. To get the effect you rock the paper back and forth as you slowly lay down your paper for the transfer and create little waves of motion to push the design into the right amount of shadows and flex without overdoing it or you’ll have blank spots and completely ruin the effect that gives you that depth you’re going for.

But wait, this isn’t just a Spanish Wave pattern. Look closer. I actually started with a frogs foot pattern, which as we all know is the opposite of a peacock pattern, but since the naming of these patterns can be pretty literal it does look like a bunch of pointy frog feet on your paper when that’s all you do.

So to summarize, I laid down my colors, raked them into a frog foot pattern, then held my breath (to make sure nothing on my tray moved), and carefully rocked and grooved the whole thing into a Spanish Wave pattern. Tada!

By the by, I don’t think that Spanish guy was that drunk, because this is some delicate work, but maybe he had had just enough libations in him, where he thought he was really laying down his paper in one steady transfer, but, not so much, and there was just enough weaving and bobbing going on as he tried to hold steady, that the wave was created. 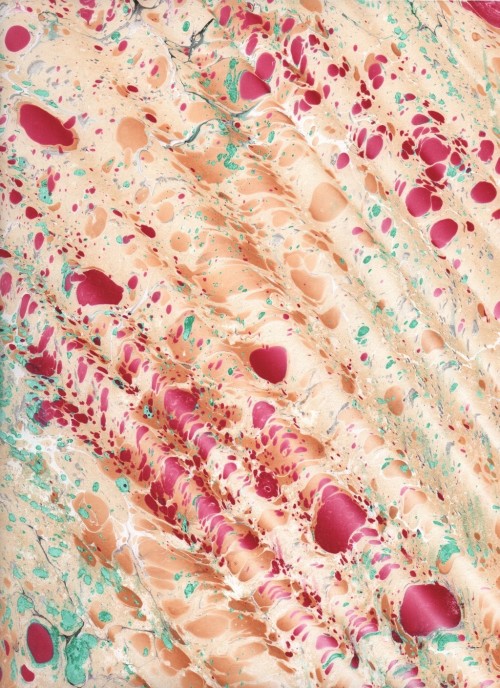 Floating a pattern on water, then capturing it onto paper.